A genealogy of affective politics

During the last military dictatorships, the habeas corpus*11 *( 11 ) was the most common procedure in order to try to get the beloved disappeared back. The families of the disappeared were invited to submit demand of habeas corpus. Obviously, the vast majority was without any outcome. It is probably due to the tension created by the insistence on the bodily presence-absence that the families are so aware of the bio-political claim represented by the demand of the return of the disappeared bodies.

Some of the most famous slogans recited indeed “Aparición con vida”, “Con vida los llevaron, con vida los queremos!” Another common practice is to say the names of the disappeared aloud and at the end of each name shouting in chorus “Presente!”. The policy of affect (and appearance) began precisely by literally giving body to the protest. In order to gain visibility, a group of brave women, the Madres, desperately looking for their children, who seemed to have been swallowed up in the depths of the earth, gathered regularly every Thursday next to the city’s main monument (it was the year 1977 in time of full repression). Some of the mothers were kidnapped and disappeared in their turn, but every Thursday there were more and more women circling around the square. As long as the dictatorship began to lose the support of the U.S. and slowly began to decline. In 1983, about 30,000 people were disappeared in Argentina. The Madres decided to occupy Plaza de Mayo for a whole day. It was the first Resistance March. But a strategy was needed to be able to withstand for so long. Three artists responded with a simple proposal: A Siluetazo action. They meant to draw all 30,000 silhouettes in the square, in order to recreate the presence of all people disappeared during the dictatorship. The idea was to show how much space they would have all occupied. In order to achieve this goal, the ones who still had a physical body lent it to the Disappeared. The action was very successful, during the whole day a great number of people came to draw the silhouettes of their beloved ones, tracing the borrowed body of those who were lying on a sheet of paper, and then, simply exchanging roles. Once the silhouette was ready, it was glued upright somewhere in the square. This incredible action went on for more than 24 hours. Powerless, the army could not suppress an artistic action for which no one had ever prepared them. 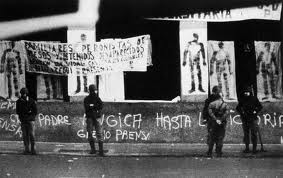 Military during the Siluetazo, Buenos Aires, 1983.

Initially, disappeared relatives were claiming for “Aparición con vida.” Over time it has become obvious that it was an impossible request. But precisely for this we still claim it. And by “we” I mean all people who are in solidarity with families with a missing person, all people who are fighting for legal justice and all the ones that have actively followed and took position in affective politics since the end of the dictatorships: families, exiled people or just committed citizens – including myself and my relatives’ struggle.

Through the practice of affective memory, the disappeared are embodied in us every time we all answer “Presentes!” The practice of affective memory is resistance against a Thanato-power, against an extreme neo-liberalism that reduced us to our zoé, to a homo sacer that can be killed but not sacrificed. Policies of affective memory through art gives them a body as well as a symbolic dimension, it does rescue those lives that indeed have been sacrificed. Art takes back the auratic dimension, rescuing that part of history and its people from the anonymity to which they were confined. Dusting off forbidden ideas and imaginaries for which many people have been brutally murdered and a piece of history has been declared illegal.

Longoni, Ana (2007): El Siluetazo (The Silhouette): On the Border between Art and Politics. Sarai Reader 07 Frontiers.

Margulies, Phillip (2006):The Writ of Habeas Corpus. The Right to Have Your Day in Court. The Rosen Publishing Group.

Taylor, Diana (2003): The Archive and the Repertoire. Performing cultural memory in the Americas. Duke University Press.

According to Camnitzer this redefinition of the guerrilla practice passes through art performativity (Camnitzer 2009: 79–83).

“Tucumán Arde” is the name of a project by an artist collective in Argentina which started in 1968. The artists conceived art as an effective instrument for social change, and through the Tucuman Arde project they sought to bring the distressed social conditions of the Tucuman province to the attention of a large public. The project was conceived of as an intervention in mass communication, a circuit of counter information against the official one of the dictatorship (Alberro and Stimson 1999).

Actually, nowadays it would probably be more correct to talk about post-dictatorial fiction(s) rather than
politics of memory as Idelber Avelar (1999) suggests.

Instead of the ritualistic protest and mourning of the Madres, H.I.J.O.S organize carnivalesque escrache or acts of public shaming. The word escrache is etymologically related to scracè= expectorar, meaning roughly “to expose”. (…) Because H.I.J.O.S entered the public arena more than a decade after the fall of military, they can afford to be more confrontational in their use of technique and public space.(…) Still their tactics serve to identify individuals responsible for gross crime against humanity. The performatic interruption, no matter how unwelcome, does not threaten their life. Like the Madres and Abuelas, H.I.J.O.S claim institutional justice, not private vengeance. (Taylor 2003:p.180-183)

The H.I.J.O.S (sons and daughters of disappeared people) association, online:http://www.hijos-capital.org.ar/index.php?option=com_content&task=view&id=21

An author that extensively wrote about this subject is Stella Calloni (2006) which is strongly recommend in order to further deepen investigation on the Condor Plan. For more general information please consult: Explanation of the Condor Operation and the United States: A Network of Southern Cone Assassination and American Avoidance 2005, online: http://www.oocities.org/thadoc78/Operation_Condor.htm and Deep politics forum community, online: https://deeppoliticsforum.com/forums/showthread.php?963-Operation-Condor.

The picana (was) an electrified prod used on sensitive body parts such as genitals and temples (…)
The Picana symbolized their (the torturers) eroticized violence and power. Just as weapons in every culture have symbolized masculinity, the picana crystallized the phallocentricity of the torture ritual. (Caro  Hollander 2010: p.115)

The writ of habeas corpus is an order written by a judge, demanding that a prisoner be brought to the
court so that the judge can decide whether the person is being lawfully imprisoned. (Margulies 2006: p.7)