Another key project/position in the Austrian context is the Research Group on Black Austrian History and Presence / Pamoja with representatives Araba Evelyn Johnston-Arthur, Belinda Kazeem, and Njideka Stephanie Iroh, among others. The pan-African movement in Austria called Pamoja brought together young Africans in Austria to fight for their rights and against racism in Europe. The starting point of the group is the violent historical presences of (neo)colonial representations in Austria. The group works with gendered images, which according to Araba Evelyn Johnston-Arthur and in reference to Stuart Hall, completely repress any existence of “homemade” (neo) colonial imagery in Germany and Austria.*12 *(12) 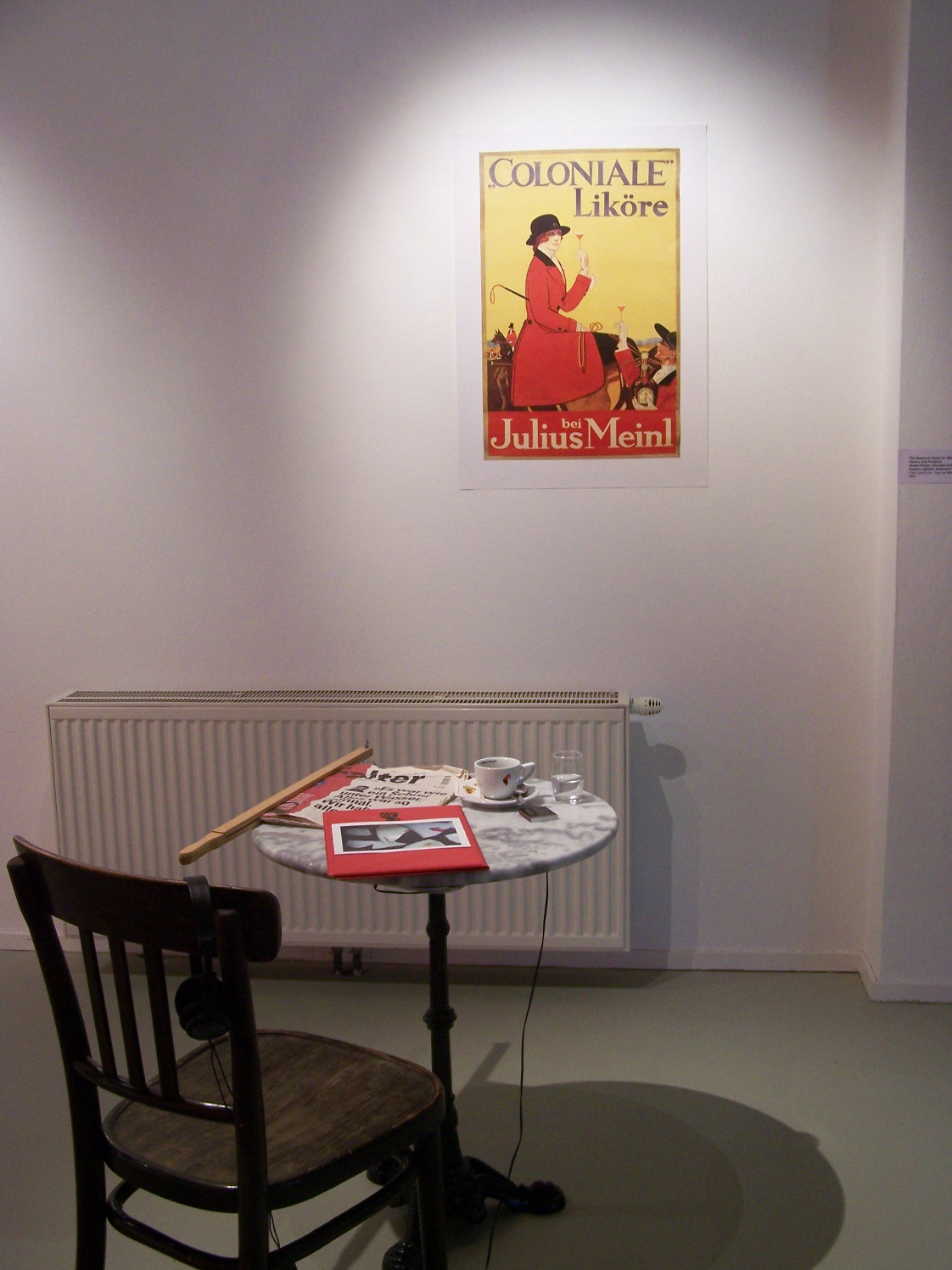 Project by the Research Group on Black Austrian history and Presence /Pamoja with Araba Evelyn Johnston-Arthur and Belinda Kazeem at the exhibition Toposcapes : interventions into socio-cultural and political spaces, curated by Marina Gržinić and Walter Seidl, at Pavelhaus Laafeld, Austria, 2007.

The Research Group on Black Austrian History and Presence connects its work to black, migrant, feminist, postcolonial theorists in the German-speaking countries such as Fatima El- Tayeb, Maisha Maureen Eggers, May Ayim, Nicola Lauré al-Samarai, Encarnación Gutiérrez Rodríguez, Grada Kilomba,*13 *(13) and Audre Lorde.*14 *(14) The group aims at recovering suppressed knowledge about Black Austrian history, creating a new space and thereby situating Black people in this country differently; namely, from a Black perspective that positions itself beyond voyeuristic depictions of the “exotic other.”

Lôbo, Marissa (2013): Iron Mask, White Torture: What is Anastacia Keeping Silent? What Does Anastacia See? In: The Editorial Group for Writing Insurgent Genealogies (eds.): Utopia of Alliances, Conditions of Impossibilities and the Vocabulary of Decoloniality. Vienna: Löcker, pp. 269–275. Translated from the German into English by Njideka Stephanie Iroh.

Preciado, Beatriz (2013): Pharmaco-Pornographic CapitalismPostporn Politics and the Decolonization of Sexual Representations. In: The Editorial Group for Writing Insurgent Genealogies (eds.): Utopia of Alliances, Conditions of Impossibilities and the Vocabulary of Decoloniality, Vienna: Löcker, pp. 245–255. Translated from Spanish into English by Marina Gržinić.

Katharina Oguntoye is a historian and has influenced the Afro-German movement; she is a co-editor of the book Showing our Colors (1986)
and is the founding member of the “Initiative of Black People in Germany.”

FeMigra (abbreviation for: “Feminist Migrants”) in Germany is an activist women’s group mostly consisting of members with an academic background or work in the social sector. They are also involved in strong networking activities with other ethnic, migrant, and Jewish women in Germany. FeMigras’ theoretical reflection of how to act politically as feminist migrants is strongly influenced by the reception of post-structuralist, black and post-colonialist authors such as Gayatri Spivak, Nira Yuval-Davis, Adrienne Rich or Angela Davis.

Lale Otyakmaz works at the University of Duisburg-Essen on and with questions of Diversity Management.

Gloria Anzaldúa (1942–2004) was a scholar of Chicana cultural, feminist, and queer theory. Her most well-known book, Borderlands/La Frontera: The New Mestiza (1987) is on her life growing up on the Mexican-Texas border and incorporated her lifelong feelings of social and cultural marginalization into her work.

Gloria Jean Watkins (1952), better known by her pen name bell hooks (written without capitals), is an American author, feminist, and social activist. Her writing focuses on the interconnectivity of race, capitalism, and gender and what she describes as their ability to produce and perpetuate systems of oppression and class domination. Primarily through a postmodern perspective, hooks has addressed race, class, and gender in education, art, history, sexuality, mass media and feminism.

Angela Davis (1944) is an American political activist, scholar, Communist, and author. She emerged as a nationally prominent counterculture
activist and radical in the 1960s, as a leader of the Communist Party USA, and had close relations with the Black Panther Party through her involvement in the Civil Rights to abolish the prison-industrial complex. Her research interests are in feminism, African-American studies, critical theory, Marxism, popular music, social consciousness, and the philosophy and history of punishment and prisons. Her membership in the Communist Party led to Ronald Reagan’s request in 1969 to have her barred from teaching at any university in the State of California.

Gayatri Chakravorty Spivak (1942) is an Indian literary theorist, philosopher, and university professor at Columbia University, where she is a founding member of the school’s Institute for Comparative Literature and Society. Spivak is best known for her contemporary cultural and critical theories to challenge the “legacy of colonialism” and the way readers engage with literature and culture. She often focuses on the cultural texts of those who are marginalized by dominant Western culture: the new immigrant, the working class, women, and other positions of the subaltern. Her best known essay was published in the 1980s with the title “Can the Subaltern Speak?” is considered a founding text of postcolonialism.

The references are from Araba Evelyn Johnston-Arthur. She is a social justice activist born and raised in Vienna to a Ghanaian family. Johnston-Arthur, as reported by Kali TV, succesfully co-founded a pan-African movement in Austria, “Pamoja,” which has brought together young Africans in Austria to fight for their rights and against racism in Europe. Published online March 26, 2013, at http://www.youtube.com/watch?v=sIiXyjOJj9U&feature=youtu.be (last visited, December 5, 2013)

Audre Lorde (1934–1992) was a Caribbean-American writer and civil rights activist. She described herself as “black, lesbian, mother, warrior, poet” and dedicated both her life and work to confronting and addressing the injustices of racism, sexism, and homophobia.

Unfortunately, the pdf-Version is not able to convert some of the special signs. We apologize for that!

Dr. Marina Gržinić is philosopher, artist and theoretician. She is professor at the Academy of Fine Arts Vienna. Her latest book is Re-Politicizing art, Theory, Representation and New Media Technology, Academy of Fine Arts, Vienna and Schlebrügge Editor, Vienna 2008. She also published an edited online book on Biopolitics, Necropolitics and De-coloniality (Pavilion, no. 14, 2010). Gržinić has been involved with video art since 1982, she works for 30 years with Aina Smid, she is professor of art history and free-lance editor. Gržinić lives in Ljubljana, works in Ljubljana, Slovenia and Vienna, Austria. Films and texts by Gržinić under: http://grzinic-smid.si/