Participate//Interviews//“We exist to stir and collect creative responses to the emergency.”//>Page 4

“We exist to stir and collect creative responses to the emergency.”

I am a bit of a Joseph Beuys fan, and I am all about planetary sculpture. I am taking Joseph Beuys’ idea of social sculpture and I am saying: “Let’s expand it to planetary sculpture”, which he did anyway by planting oak trees. But all of us must be much more in touch with our creativity and our imagination. And all of us have to be much more in touch with the earth. All those people joining Climate Museum UK have different ways of understanding and expressing the relationship between them and the earth. For example, James Aldridge is an artist in our team who works a lot with walking and nature connection. He goes on walks and he makes bundles from the things he finds. He works a lot with young children, and he helps them to understand the natural world through very sensory activities. Very playfully. But also, he helps them to understand that the natural world is in trouble. That is just one example of how art is used. It is about responding to the world, really.

Could you give us some examples of the formats you’ve created? Because we already have games and brochures and stuff. Maybe you can describe something more concrete?

I can talk just about my own formats, and others are developing their own. One thing that has been working really well is a suitcase of objects. I collected them just around the house or from junk markets. There are things like a temperature gauge, a Little Sun solar light, a toy, an hourglass, a sand timer or an old snowman candle. They are not precious things. They are just objects for talking with. All the objects are in cloth bags. When we run workshops, we might put a little selection of objects on a table. A lot of people participate and so there might be many tables with people around them. Then, we give a series of prompts for them to play with the objects, to interpret them, to write labels or to maybe select one. Maybe then to pass an object to another table. Or to make their own objects with clay.

Who are these workshops for? What kinds of people?

University students. School groups. Activist groups in the community. Some have been open for the public to book in. Who else have we done that with? The Wellcome Collection in London. The Wellcome Trust is mostly focusing on medical science, but they also support a lot of cultural work and they have some sort of museum. They have a group of young people called RawMinds. The young people form a youth panel that is interested in the relationship between health and the environment, but also in culture and cultural diversity. We did a workshop with that group of young people. We would also like to work more with schools and encourage them to make their own museums of objects as well. 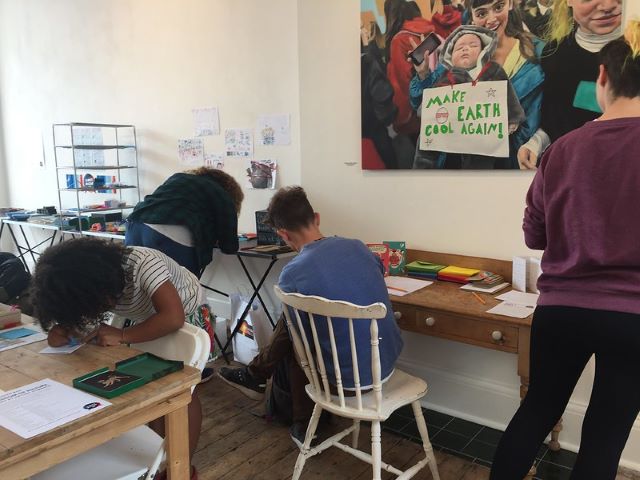 Thank you, that was a great example! Would you mind telling us about another one? Is there another format you use in your workshops?

Yes. At the beginning, I mentioned the format of focusing on objects to communicate with. Quite a lot of the resources we have are trying to help people understand the big systems. There are these sets of cards. The cards offer lots and lots of solutions for the climate emergency. And not just the climate, but the ecological emergency. I have taken all of these possible solutions from Project Drawdown. I simplified the very complicated text and put the solutions on cards. There are about 50 solutions here. They will be used in workshops in a range of different ways. One of them is to do a future scenario planning exercise. It is a possitopian activity, where we invite people to imagine a particular scenario. It might be a particular place on a particular date in the future. For example, Central London in 2030. And then, to specifically imagine an impacted scenario. A scenario where something has happened related to the crisis. It might be during a heat wave. And then, they take the set of cards and apply some of the leverage solutions. So, how would this scenario be different if our business community had fully taken on board the whole idea of biomimicry and all business was completely driven by the practice of copying from nature? It is a possitopian practice to imagine lots and lots of different scenarios. Then, participants would keep taking another card and another card. “How could we stop the city being so badly impacted?” “If we introduced citizens’ assemblies from now on, would the future scenario be different?” There are several different games you could play with those cards. We are keen for people to play with them and tell us how they are using them. So, we provide those cards with a number of other activities and some posters in what we call our DIY printable display. People can buy the Hi-Res documents and posters from us in order to print them out. There are three posters: “What caused the emergency?” “What are the impacts?” and “What are some of the solutions?”

The Innsbruck Nature Film Festival followed up and the Climate Museum UK provided a display for a cinema foyer in Autumn 2020.

Since this interview, there have been some changes in the thinking and structure of Climate Museum UK.

Bridget McKenzie is a researcher and creative curator in culture, learning and environment. She has been director of Flow Associates since 2006, after 14 years in roles such as Education Officer for Tate and Head of Learning at the British Library. She is an advisor for Culture Unstained and co-founder of Culture Declares Emergency. She presents and publishes internationally on possibilities of Regenerative Culture. She is founding director of Climate Museum UK, a new CIC which stirs and collects the emerging response to the Earth crisis.
@bridgetmck
https://aboutbridgetmckenzie.wordpress.com/