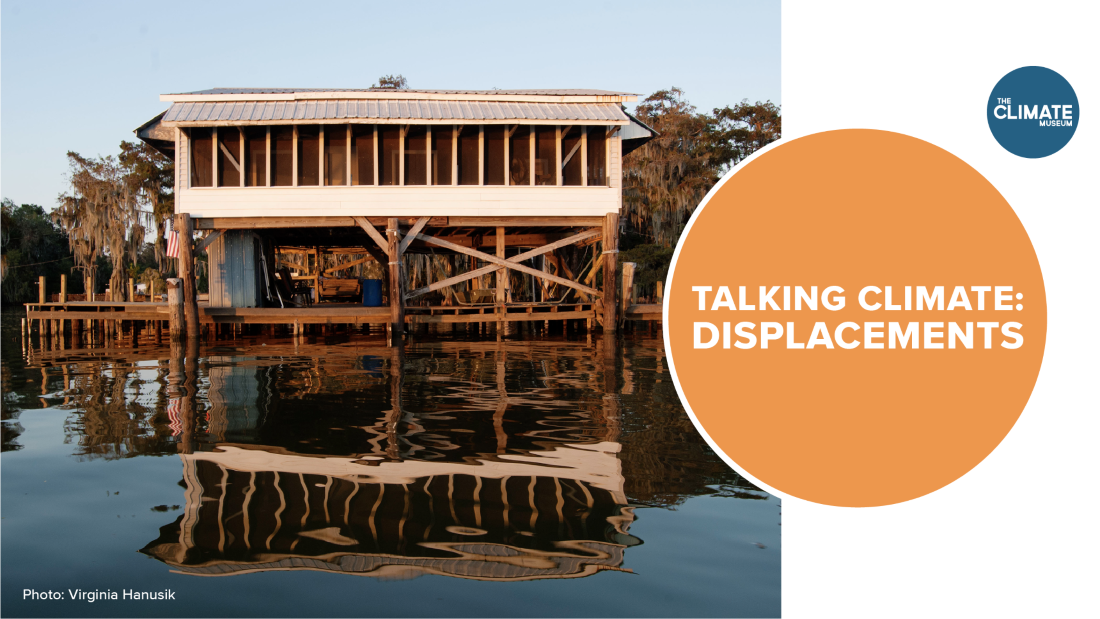 A Cultural Institution Taking Action on Climate and Inequality: The Climate Museum in New York City

The climate crisis saturates global existence in the present day. Everywhere we see the impacts of a changed and changing climate on people—our lives, livelihoods, and bodies—and the places we live. Adjectives like “record-breaking” (Bhatish/Cho-Schagrin 2021)

(*2) are now commonplace when describing soaring temperatures or the aftereffects of flash floods and hurricanes. This year’s extreme weather has seen devastating impacts in multiple regions on every continent.*3 *(3)

Cultural institutions are in a unique position to educate broad audiences about the realities of the climate crisis through a variety of media, and to provide audiences with options for what to do: how to integrate community-building around climate into their daily lives and to make climate a part of their political praxis. Museum programs, campaigns, exhibitions, events, and other forms of cultural programming can inspire action among constituents in ways that other institutions may be unable to. As organizations that are respected by the public as credible sources of information and as institutions imbued with significant public trust (Dilenschneider 2017)

(*3) museums are uniquely situated to use their social position as culture-showcasing and culture-creating to advance the public good.

In this way, museums are the ideal venues for educating the public on the axes of “urgency and agency” (Mann 2021)

(*4) on the climate crisis, emphasizing both the necessity of taking action on climate right now and offering possibilities for ways to take action. Both, according to climatologist and author Michael E. Mann, work to counteract decades of messaging tactics by the fossil fuel industry, first to deny the reality of the changing planetary climate, and now to engage in the delay of meaningful government action across many nations. Investing the public with urgency and agency on climate can have deep impacts socially in developing the political agency of museumgoers and in combating the fatalism that may arise from seeing continued climate inaction amid undeniable loss and damage wrought by the effects of the climate crisis on already-fragile systems. A forthcoming study shows that young people (ages 16-25) around the world say that the climate crisis causes them significant anxiety and emotional distress, creating a sense of despondency with respect to the future and exacerbating feelings of betrayal by governments and those in power for their lack of urgency. (Marks et al. 2021)

(*5) Addressing feelings of powerlessness regarding climate among the public of all ages is something that museums are capable of doing.

Feelings of helplessness or disillusionment do not solely arise from climate, just as the climate crisis does not exist in a vacuum. While the crisis is truly planetary in the scope and range of its effects, its consequences are neither uniform nor evenly dispersed, even within a single locale. Histories of inequality shape the realities we see today. Dispossessions based on race, gender, class, disability, sexuality, ethnicity, refugee or immigration status, and other forms of demographic variation structure human environments. All of these spaces are governed by policies—conventional, legal, and structural—that reveal something about inequality and that serve to maintain the entrenchment of forms of inequality. Where inequality meets the climate crisis, both crises intensify. For example, in the United States, elevated temperatures and extreme heat result in 12,000 premature deaths per year, a number that is projected to increase due to climate change. (Shindell et al. 2020)

(*6) Urban heat vulnerability is a persistent source of concern during the summer months, with each heatwave bringing more casualties. Consistently across cities in the U.S., communities of color are more vulnerable to heat impacts. This is due to racist federal housing policies that segregated urban space and maintained divisions from the 1930s on, restricting where African Americans and immigrant communities could purchase or rent homes. These policies marked certain neighborhoods within American cities as “desirable” and others as “declining” or “hazardous” in a process known as redlining. Racism was enabled and maintained through these oppressive policies. For decades afterward, lawmakers systematically denied investments in redlined neighborhoods, including planting trees or building green spaces like parks. As a result of having more paved surfaces and less tree cover, formerly redlined neighborhoods are uniquely vulnerable to soaring temperatures today, over 90 years later. This can create a heat differential of 5 degrees Fahrenheit to as much as 20 degrees Fahrenheit between neighborhoods of color and their white counterparts within the same city. (Plumer/Popovich 2020)

(*8) shows that this is the case in 94% of American cities, definitively linking the legacies of racist housing policy to present-day heat exposure. Climate effects exacerbate extant unequal forms, deepening their severity and impacts. And the entrenchment of various kinds of inequality means that climate solutions need to substantively address the effects of historical and contemporary inequities in order to be truly accessible for all.

All of the discussions on climate and inequality held at the Climate Museum can be accessed here: https://www.youtube.com/playlist?list=PLuVeADJ3Es83evjF6YuYQP3FjaXHeokUO

The archived reading of “You Are Who I Love” (2017) by Aracelis Girmay during Black Lives and the Climate Crisis can be found here: https://www.youtube.com/watch?v=Wt2VOg2RI84&t=129s&ab_channel=TheClimateMuseum

You can access Talking Climate: Food in its entirety here: https://www.youtube.com/watch?v=S2Wr5BWNhVg&t=78s&ab_channel=TheClimateMuseum

Dilshanie Perera is the Mellon Foundation Post-Doctoral Fellow in Climate and Inequality at the Climate Museum. During their doctoral research, Dilshanie conducted fieldwork in Bangladesh on uncertain weather, emergent risks, and long-standing structural dispossessions. Dilshanie holds a B.A. from the University of Chicago, an M.A. from the New School for Social Research, and a Ph.D. in Anthropology from Stanford University.