In the next session our topic was the art field and distinction. Elisabeth Klaus introduced the students to the work of Pierre Bourdieu. We talked about the concepts of habitus, taste, and distinction; of the different forms of capital and of the social field and its illusion. In Bourdieu’s theory, structure and individual are co-constituted. Social structure is not an outside force, but is within us, engrained in our opinions, values, and actions. We constitute the social field; we are the field. Bourdieu’s writings, especially his Distinction: A social critique of the judgment of taste (1984) deeply influenced Andrea Fraser. His work became a kind of “second language” for her. Pierre Bourdieu, for his part, spoke highly of the feminist artist. As Alexander Alberro, the editor of a collection of her writings has noted:

Andrea Fraser’s work, writes Pierre Bourdieu in his foreword to Museum Highlights, is able to ‘trigger a social mechanism, a sort of machine infernale whose operation causes the hidden truth of social reality to reveal itself.’ It often does this by incorporating and inhabiting the social role it sets out to critique—as in a performance piece in which she leads a tour as a museum docent and describes the men’s room in the same elevated language that she uses to describe seventeenth-century Dutch paintings. Influenced by the interdisciplinarity of postmodernism, Fraser’s interventionist art draws on four primary artistic and intellectual frameworks—institutional critique, with its site-specific examination of cultural context; performance; feminism, with its investigation of identity formation; and Bourdieu’s reflexive sociology. (Alberro 2015, n.p.)

Bourdieu also explored the artistic field in a number of his publications (for a summary, see Kastner 2009). It therefore seems that his work is ideally suited not only to shed a critical light on positions, roles, and judgments in the artistic field and the inequalities it is built upon and generates, but also to bridge the difficult divide between art and science.

In the afternoon and following the talk we held a workshop on “Institutionskritik im Bildungssystem und am Beispiel der Universität.” (Institutional critique in the educational system, based on the example of the university). In the workshop we focused on the field in which we work: the educational and academic realm. Linking the university to the analysis of Bourdieu, we asked: How is education linked to academic institutions and who defines it? Who is a part of it and who is excluded? Who are the players and contestants in the field, what are the rules by which the hierarchies are determined and power is established? Inspired by a vivid discussion, the participants created three posters. 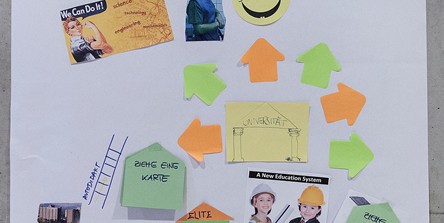 Bourdieu, Pierre (1984): Distinction. A social critique of the judgment of taste. Routledge.

She is a professor and the Chair of the Communication Department at the University of Salzburg. Her research mainly focuses on communication, journalism and feminist media studies, popular culture, and theories of the public sphere. Her numerous publications include Identitätsräume (2004, with Brigitte Hipfl and Uta Scheer), Kommunikationswissenschaftliche Geschlechterforschung. Zur Bedeutung der Frauen in den Massenmedien und im Journalismus (2005), and Media Industry, Journalism Culture and Communication Policies in Europe (2007, with Hans Bohrmann and Marcel Machill).