Participate//Notes//Thoughts about a Decentralized Academy in Graz – (Un)Learning Contemporary Art?

Thoughts about a Decentralized Academy in Graz – (Un)Learning Contemporary Art?

“Trial Mode 01,” a symposium held from March 28th to 30th, 2014 at Forum Stadtpark in Graz raised the question of what a decentralized academy of contemporary art might look like. The symposium originated from the wish and demand expressed by arts practitioners in Graz who have lobbied for the past fifteen years, thus far unsuccessfully, for the implementation of an art academy in the city.

The aim was to show what a (decentralized academy) might look like: A dense program of lectures, workshops, and discussions provided an opportunity to explore questions related to alternative education and arts education while gathering art practitioners, theorists, and curators from around the world. A critical mass was achieved with ca. 70 participants, which made the three days a worthwhile endeavor and a lively space of debate.

Graz is a city with a lively arts scene – institutional as well as autonomous. Lacking, however, seems to be an academy for the visual arts: present are the University of Music and Performing Arts Graz and architectural studies at the Graz University of Technology. In the field of visual arts, however, the city offers no higher education. An education in visual arts in Graz is limited to a secondary school level with the department of Art and Design at Graz Ortweinschule.

Nevertheless, institutions such as Forum Stadtpark and the internationally renowned “steirischer herbst” festival contribute to a rich and critical art discourse in the city.

Forum Stadtpark, the site of the “Trial Mode 01” symposium, was initiated in 1959 by a group of artists, scientists, and cultural workers as a grassroots initiative that continues to successfully renew itself and remain connected to the local arts scene at a grassroots level. Nevertheless, this art institution has had a tumultuous history at various times. No least, when the idea of creating an art academy based in Forum Stadtpark was raised in 1996. Back then the process failed.*2 *(2)

Today, almost 20 years later, an in-part new generation of protagonists in the arts field are once again expressing concern over the city’s lack of a permanent space dedicated to teaching, learning, and exploring contemporary arts.

Protagonists from diverse arts institutions and organizations*3 *(3) have gathered yet again to discuss the question of whether Graz should have an academy for contemporary visual arts and what this academy might look like.

The title of the symposium “(Un)Learning Contemporary Art” points ironically to the local situation of a long standing demand for an arts academy that until the present day has not been seriously considered by local cultural politics. At the same time it opens up a space to think anew what, for instance, a decentralized self-organized art academy might look like with reference to the discourse of unlearning privileges (Spivak 1988): Not being an exclusive institution of higher education, but instead, creating structures and spaces of self-organization in arts and education, merging arts into everyday life and grassroots activism. Examples of initiatives from all over the world linking arts, politics, and education were presented at the symposium in lectures and workshops. 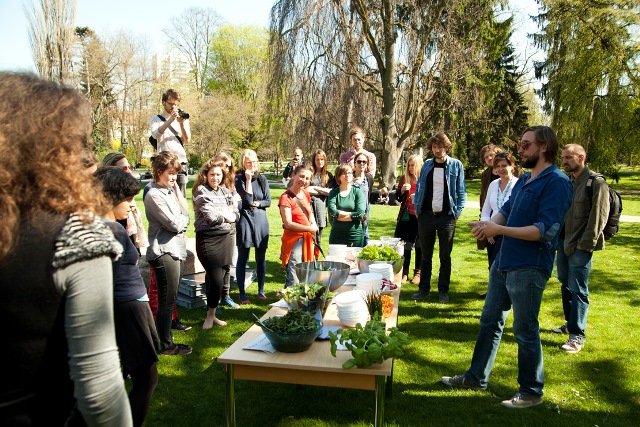 Spivak, Gayatri (1988), “Can the Subaltern Speak?” in Nelson, Cary/ Grossberg, Lawrence (eds.), Marxism and the Interpretation of Culture, London: Macmillan.

There was an intense process around the idea of developing an arts academy based in Forum Stadtpark, which ended in controversies within the project group and ultimately led to an end of the process. What remains is the documentation of a Symposium and some articles in a publication.

In 1996 Stephan Dillemuth was invited to moderate the process of the development of a concept for an art academy in Graz based in Forum Stadtpark.

In 2010 the Europe wide movement of occupying universities and academies started with student protests in Vienna.