As this conversation begins, the question of the artist’s role vis à vis the social lags. With much discussion of the relationality of the artist vis à vis other social agents, and much cursory critique of capitalism, little has been done in art school pedagogy to address the modes of social relationship building that are common to artistic practice and the degree to which they uphold capitalist and neo-liberal values. Though extremely cognizant of terms such as instrumentalization, young artists are often interpellated into acts of symbolic social action that in fact perpetuate projects of social deception. Without the tools to understand and act upon social contradiction (and with the blinders that come from overly self-oriented practices) they are often made use of in assuaging social conflict.

Take, for example, the work of Shephard Fairey, made famous for the Obama poster HOPE, who was later commissioned to create a mural on the location of the Youth House eviction in Copenhagen. A site of major struggle in which young people fought for weeks to preserve a central organizing site in the city, Fairey’s monument “Peace” (2011) was met with graffiti including the words “No Peace!” and “Go Home Yuppie Scum” by those who refused to forget the degree of police violence by which Youth House occupants were evicted. Fairey went on to alter his depiction only after these issues were highlighted by Youth House activists: turning a public sculpture commission into an ad hoc art school in unpacking the artists’ role as agent of social neutralization. 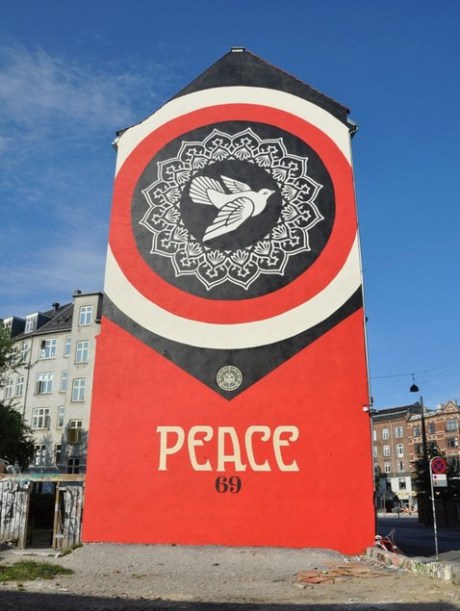 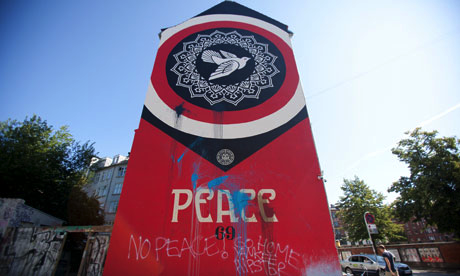 As in the case with Fairey, and due to the paucity of the kind of educational context in which an artist might engage in solidarity work with activists from the onset, artists’ education in social contradiction is often left to social agents. Take, for example, the recent proposal by artist Mike Nelson, presented by the public commissioning agency Artangel.*2 *(2) This project cynically sought to build a pyramid out of the empty former social housing units from the Heygate Estate in London. This estate in South London has been the site of a multi-year struggle of residents and local supporters against the eviction of thousands of tenants and the gentrification of Elephant and Castle, a prominent working class area of the city. Again, social activists, including artists, mobilized through the organization Southwark Notes, in order to stop the proposal from proceeding at a city planning hearing… and won. This, after several appeals to the commissioning agency and the artist, to explain the history of struggle on the site and suggest their withdrawal of the proposal.*3 *(3) Here, it is up to activists to become the “teachers” of an artist and commissioning organization, enlightening them to the consequences of a failure to sufficiently understand the histories of struggle into which artistic intervention is proposed.

Hickey, Amber, “Beyond Reflection. Radical Pedagogy and the Ethics of Art Sponsorship,”  http://www.amberhickey.com/docs/Article_AH_final_c.pdf

For information about the boycott, see http://hyperallergic.com/131497/over-100-artists-and-intellectuals-call-for-withdrawal-from-creative-time-exhibition/.

Originally trained in Geography, Janna Graham has developed radical research and pedagogical projects in and outside of the arts for many years. Graham is a member of the international sound and political art collective Ultra-red, works with the Precarious Workers Brigade in London and is currently Projects Curator at the Serpentine Gallery. There she and others have created the Centre for Possible Studies, a research space and artistic residency in which artists and local people create ‘studies of the possible’ that expose and respond to social inequities in the Edgware Road neighbourhood of London.

Nicolas Vass works with a number of London-based collectives in response to injustices in education, arts and culture as well as UK migration policy. As an artist he has developed Re-constructing Hasil, a performance based on the work and music of depression era one-man band Hasil Adkins. With this project, he looks at issues of contemporary artistic and cultural labour, austerity and performativity. He is currently a Phd candidate at the University of Leicester, where he is doing research on micro-politics and value production in the contemporary art industry.