Hassan Mahamdallie is a playwright, stage director, writer, activist and expert in diversity and the arts. For Arts Council England, he developed the Creative Case for Diversity, a unique approach to diversity, equality and the arts. In this interview, he gives an insight into his understanding of diversity and the central arguments, successes and challenges of the Creative Case. He argues for the democratization and decentralization of the arts, which has to go hand in hand with a redistribution of resources and power in favour of marginalized artists.

What is your understanding of diversity? Which concepts and theoretical references do you draw on?

My concept of diversity is framed wide and deep, as I think it should be. In theoretical terms, you might call it intersectional: it covers a lot of different aspects of human life and the connections between them. Diversity is also a concept which goes across different streams of thoughts.

As I have always said, we don’t have to invent diversity because diversity just is. Blocking out diversity, confining diversity or trying to limit diversity is a human thing that we’ve done. Therefore, it’s not so much about creating diversity as it is about dismantling barriers and fighting inequalities which are structural and man-made and therefore can be altered. The big question is how we change those structures to make them more equal. If we can liberate diversity from man-made confinement then diversity in all its different facets will become part of everyday life, rather than something which is shut out.

What does this mean with regard to the arts?

I think that it is the same for the arts: Who we give our arts funding to, how we programme or curate, who we encourage or elevate or give value to – or, in reverse, do not give value to – these are all things which we have done to limit diversity in the artistic world. As an artist myself, I believe that diversity is one of the central elements in artistic practice and in the creative act itself. Quite often, issues of diversity, equality and all the catchphrases and artificial terms that we use – what they don’t take into account is their relation to arts practice, the creation of art, creativity, human expression and all those aspects. What concerns me most is the way we separate diversity from artistic practice.

Which concrete actions are needed to make the cultural sector more equal and more diverse? Which actors are needed and on which levels do we need change?

I don’t believe there’s a technocratic solution to this question of diversity and inequality. I don’t believe that there’s some way in which we can tweak our structures, processes, projects or ways of doing things. Because at the end of the day, it’s about two things and they’re both connected: one is power and the exercise of power, and the second, which is related to it, is a lack of democracy in the arts. I believe that when you start tackling these issues, ways will automatically follow to make things more equal and give more people opportunities.

But of course the problem we have is that power is very attractive. The arts are about as undemocratic an area of human activity as you can possibly find. We artists talk a lot about democracy and equality in the arts. The arts are based on that, historically; I mean, at least there is one strand that is definitely based on that notion of the liberation of the human spirit. But we are also very riddled with power structures and a lack of democracy in the arts. Before we get to what can we do about it, we have to name the beast; we have to recognize what it is that is stopping change.

It seems to me that there was a consensus on the stage at the Belvedere Museum in Vienna, where I did my talk.*1 *(1) We had a whole group of people who span the arts, from activists to leaders of institutions and politicians in charge of policy. They all agreed that something fundamental had to happen; someone was talking about things that they were already doing, and so on. But at the same time, so little has changed. And the more we talk about it, the less change seems to happen. I think the reasons for this are issues of power and democracy in the arts.

The main problem is the structural issues, because within the structures are the concentrations of power and decision making, and democracy is about decision making. The way we organize the arts in the West needs to be completely dismantled and rebuilt from the ground up in ways that are much more participatory, empowering, sharing, equal, egalitarian and democratic, so that power is distributed, not accumulated. 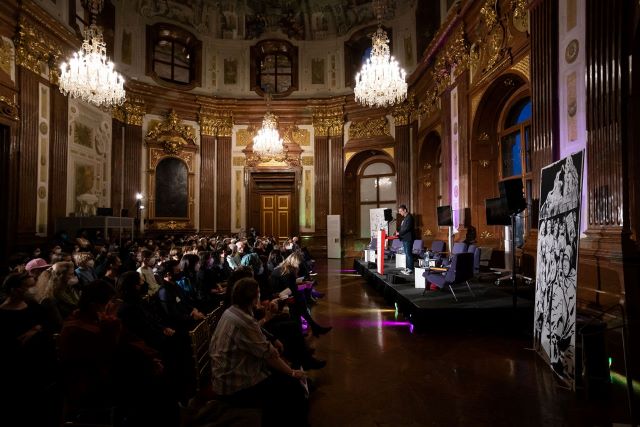 On March 31, 2022, Hassan Mahamdallie was the keynote speaker for the D/Arts event in Vienna, ‘D/Transformation – Diversity in Decision-Making Positions in the Cultural Sector’ (see the text based on the keynote speech in the link https://www.p-art-icipate.net/why-diversity-in-arts-cannot-be-ignored/). He also took part in the panel discussion.

Hassan Mahamdallie (he/him) is a playwright, stage director, writer, activist and expert in diversity and the arts. For Arts Council England, he developed The Creative Case, a unique approach to diversity, equality and the arts. He is formerly a Director of the Muslim Institute (UK) and remains a senior editor of its journal, Critical Muslim. Hassan Mahamdallie founded the radical theatre company Dervish Productions, whose mission is ‘to amplify voices from the edge’. He has written extensively on culture, working class history and politics, punk rock, Black British history, racism and Islamophobia. He is the author of Crossing the River of Fire: The Socialism of William Morris (Redwords, 2008/2021) and Black British Rebels: Figures from Working Class History (Bookmarks, 2012) and the editor of Defending Multiculturalism: A Guide for the Movement (Bookmarks, 2011). His new play, Quiet Rebels, will tour the UK in 2022. www.dervishproductions.com