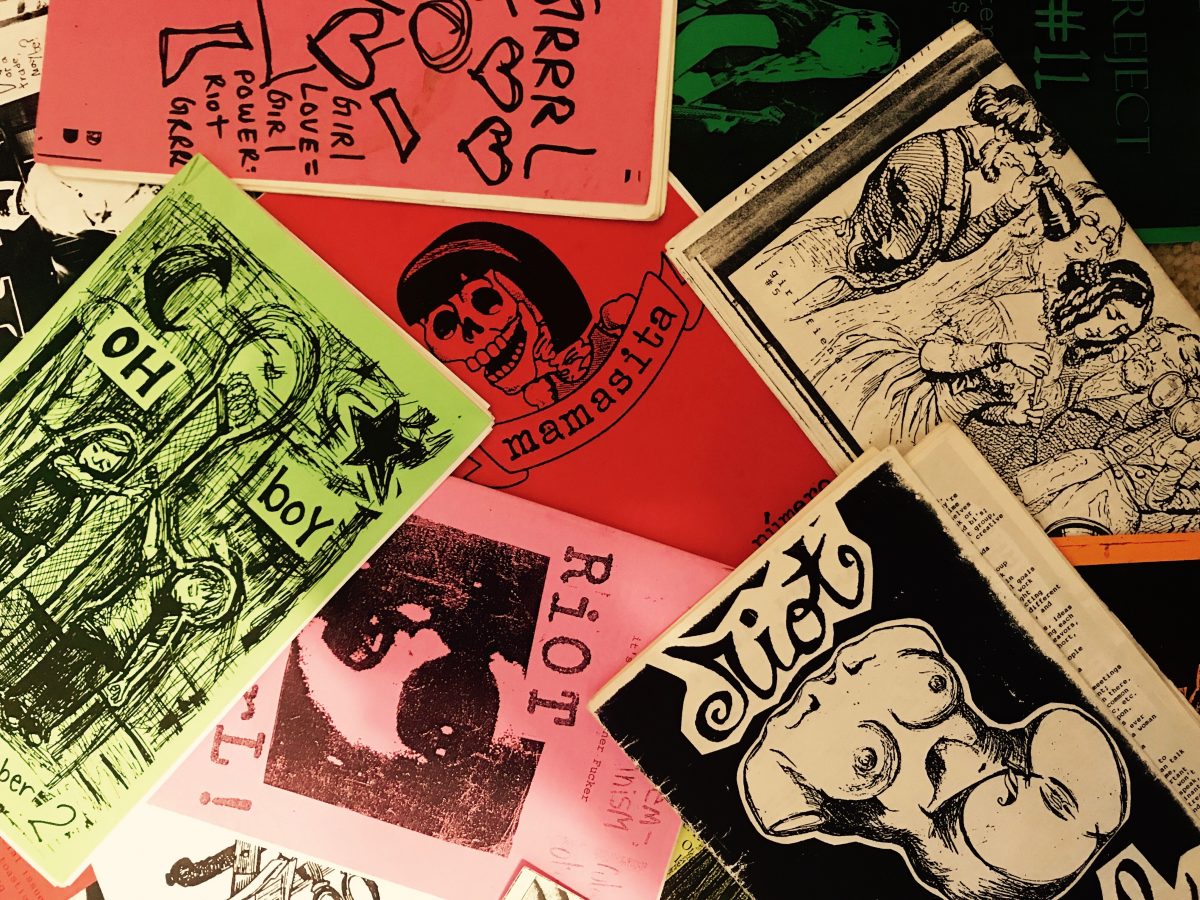 Participate//Articles//Zines, Art Activism and the Female Body: What We Learn from Riot Grrrls

Zines, Art Activism and the Female Body: What We Learn from Riot Grrrls

In 1973, the United States Supreme Court heard Roe versus Wade case and ruled that abortion was a woman’s legal right in the United States.*1 *(1) Yet, each state has the ability to enact their own abortion laws and interpretation of The Constitution. 2019 has seen multiple states make abortions illegal after six weeks, with possible prison time for both providers and women.*2 *(2) In 2006, Tarana Burke started the #MeToo movement, calling women of color, sexual assault and violence survivors to take a stand with the goal of promoting “empowerment through empathy.”*3 *(3) In 2017 the #MeToo movement received global recognition when American celebrities started to use the hashtag in response to Harvey Weinstein and other experiences of sexual assault and harassment in Hollywood.

As we watch women’s bodies being attacked and reproductive rights decided by politicians, women in the United States and around the world are standing up and fighting against the laws that are being created to determine what a woman can and cannot do in their lives and with their bodies. Yet, with all the attacks on women, art activism is an important site of resistance, especially surrounding women’s reproductive rights and body politics. Exploring art activism as a feminist act is central for understanding resistance to body policing. There are various examples of current art activists around feminist body politics, but often we forget about the long history of women as political and social activists, especially young women activists.

The discussion of body politics, especially around women’s sexual and reproductive rights, has occurred in many activist forms throughout the feminist history of the United States. Although there are important discussions around women’s rights and body politics all over the world, I want to focus on the history of American art activism, especially as it is situated in punk music subcultures. Specifically, the riot grrrls of the 1990s, who started in the United States, and their use of zines as tools for feminist art activism. I will start by discussing a short history of feminist reproductive rights and body politics activists in the United States and then address how punk feminists used the art of zin-ing to present ways in which young women could confront sexual violence and reproductive rights through the use of women’s self-defense and narratives. By focusing on these young feminist activists and their art activism, I will present one way that feminist art activism was used for education and empowerment and social change.

At the same time as the Roe v. Wade decision was being made, anti-sexual violence activism started in the United States. Support structures for survivors, new laws, and advocacy groups were becoming visible. Moreover, the first rape crisis centers were established in the early 1970s by women who did not feel the law was meeting the needs of sexual assault survivors. It was in 1975 that Michigan passed the first rape shield law, protecting victims from having their sexual histories used in court.*4 *(4) In 1978, the US Congress passed a rape shield law as well. In 1994, the Violence Against Women Act (VAWA) was passed by the U.S. government, making sexual violence a violation of an individual’s civil rights. In 2001, April was declared to be “Sexual Assault Awareness Month” in the United States, hoping to bring more awareness to sexual assault and sexual violence. Yet, it wasn’t until 1993 that marital rape was a crime in all 50 states.*5 *(5) Within the United States, recently, the #MeToo Movement and the call for public figures such as Matt Lauer or Harvey Weinstein to be removed from their positions of power present the growing number of protests and sexual violence awareness throughout the United States.

The history of reproductive freedom in the United States is extensive. Activists such as Margaret Sanger and Emma Goldman led the fight for access to birth control, sexual freedom and advocacy, as well as women’s rights to control their own bodies and reproductive health. Prior to the 1973 Supreme Court decision, in the United States abortions were controlled through state laws and were not considered a federal matter. The first abortion law was passed in the 1820s, limiting abortions after four months. By the 1900s, the American Medical Association (AMA) advocated abortion laws in most states. The AMA’s involvement occurred in order to stop midwives and home remedies that were being used to perform abortions. As women, midwives were taking power and control away from medical “regular” professionals and giving women power over their bodies and reproductive choices. They were seen as unwanted health care providers by the largely male medical profession.

In 2019, 9 states passed laws limiting abortions, some as early as six weeks. These are a mix of abortion bans and fetal heartbeat bills, some of which have been struck down and others which have passed. (Lai, 2019).

I define punk feminists as individuals involved in punk subcultures who have feminist ideologies and apply them to their subcultural participation.

In punk, coat hanger is a negative term used to refer to girlfriends who just hold the coats of their boyfriends as the boyfriends participate in the mosh pit or other aspects of punk.

This is an extremely short version of riot grrrl. For a more comprehensive discussion on riot grrrl history please see my book, Writing a Riot: Riot Grrrl Zines and Feminist Rhetorics (Peter Lang, 2018) or Sara Marcus, Girls to the Front: The True History of Riot Grrrl (Harper Perennial, 2010).

Dr. Rebekah Buchanan is an Associate Professor of English and Director of English Education at Western Illinois University. She was a 2018-2019 Fulbright Roving Scholar to Norway where she spent the year conducting workshops on United States history and culture to students and teachers throughout Norway. Her research focuses on feminism, activism, and literacy practices in youth culture. Her latest book is Writing a Riot: Riot Grrrl Zines and Feminist Rhetorics (Peter Lang, 2018).